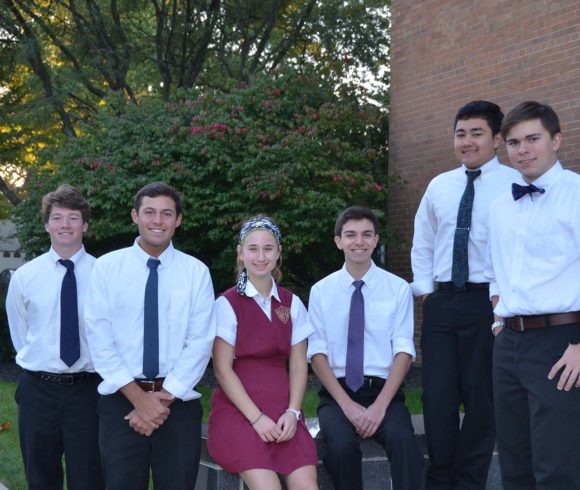 Six Bishop Watterson students have been named National Merit or Commended Scholars based on their scores on the 2016 Preliminary SAT/National Merit Scholarship Qualifying Test (PSAT/NMSQT).

Joshua Cho is a National Merit Semifinalist. He is involved in numerous activities, including National Honor Society, and Bishop Watterson’s Gold Standard A Capella Choir, theatre and French and Italian Exchange programs. Cho is an Eagle Scout and secretary of the BWHS Concert Choir in addition to being involved in high school youth ministry at Heritage Christian Church. He also taught English in Korea through the Bridge to America program. Cho plans to major in premedical studies in college.

Nina Buoni is a Commended Scholar. She is captain of the BWHS varsity lacrosse team, for which she is a four-year starter. In addition, she is a member of the BWHS Gold Standard A Capella Choir and Worship Band. Buoni is a sailing instructor on Lake Erie, an altar server at St. Andrew Catholic Church and has completed more than 250 hours in service to her community or on mission trips.

Jack Davidson is a Commended Scholar. Davidson plays soccer and is involved in BWHS marching, concert and jazz bands in addition to pit orchestra. He plans to major in computer engineering in college.

Patrick Mulligan is a Commended Scholar. He is a member of National Honor Society, a homeroom representative to Student Council, a Senior Leader, a Kairos Retreat Leader, an attorney on the mock trial team, a member of the cross country team and a member of the St. Joseph of Arimathea Pallbearer Society. In addition, he volunteers at Kidsport Buckeye Gymastics helping physically and mentally handicapped children perform physical tasks related to gymnastics. Mulligan plans to major in engineering at Notre Dame or Ohio State.

John Stimpfl is a Commended Scholar. He is president of the senior class and a Boy Scout. Stimpfl plans to major in Electrical Engineering at Purdue.

Noah Weaver is a Commended Scholar who is a member of the Gold Standard A Capella Choir and Concert Choir and performs in BWHS dramas and musicals. Weaver volunteers with The Adaptive Adventure Skiing Coalition and at Riverside Methodist Hospital. He plans to major in biomedical engineering at the University of Pittsburgh.

For more information, go to www.nationalmerit.org.