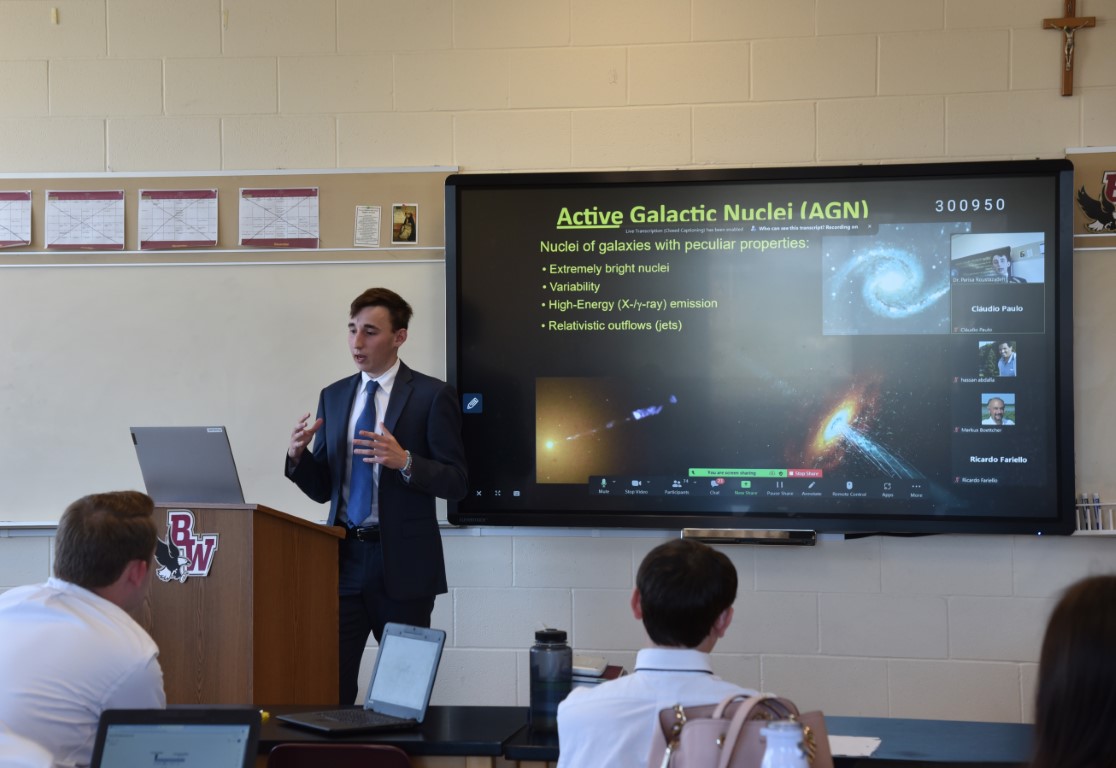 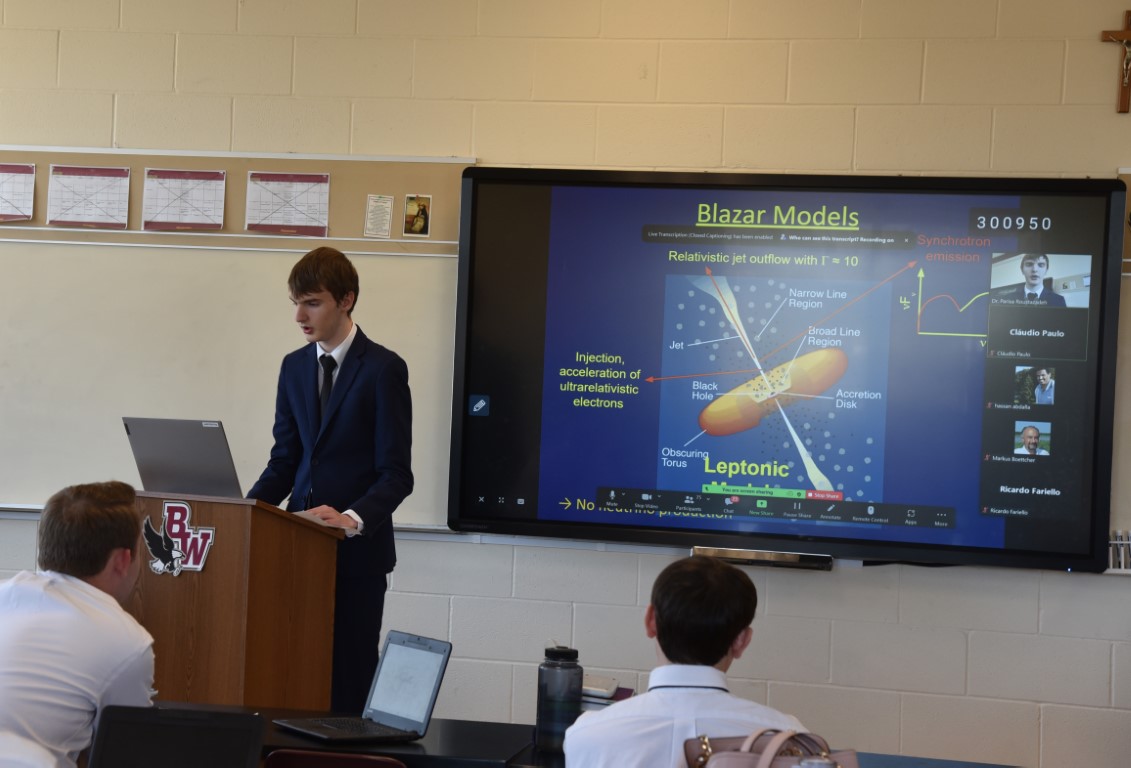 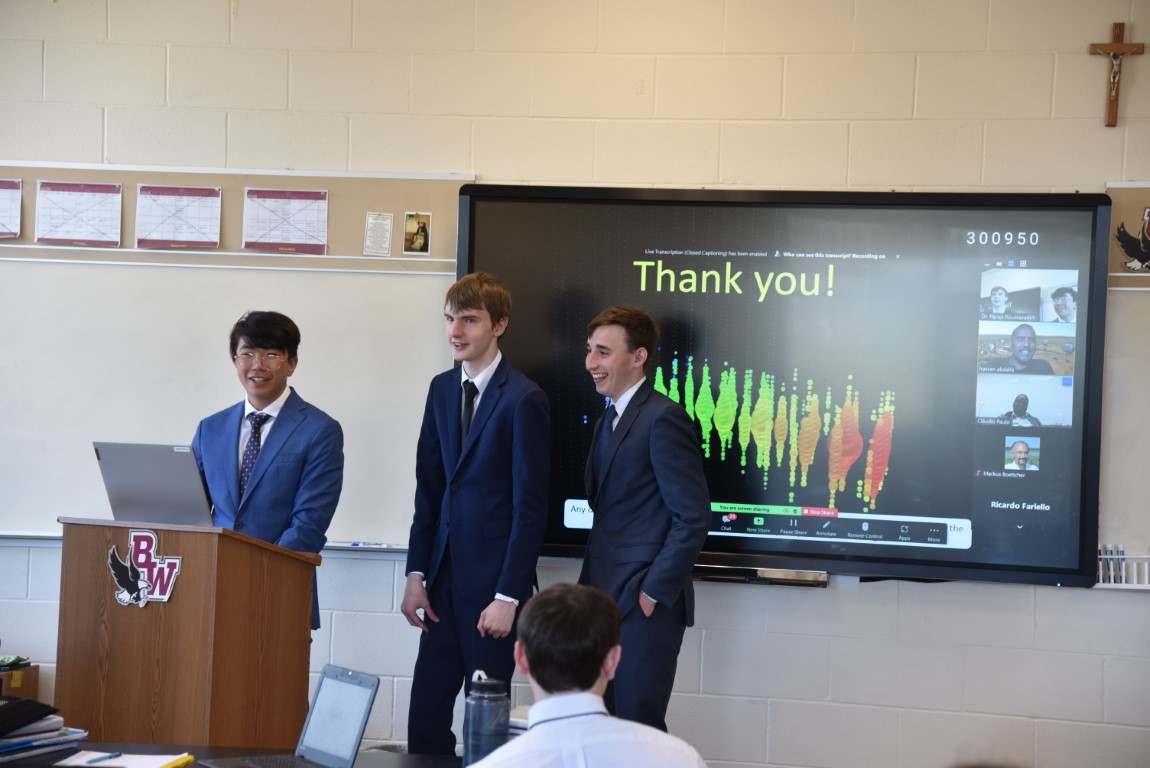 Seniors Matthew Fu, Timothy Govenor, and Quentin King presented a talk at an international conference this week about their research work on the origin of astrophysical neutrinos. They were the only high school students to present at the conference, titled the “First Pan-African Astro Particle and Collider Physics Workshop” which started on Monday and concludes today. Other presenters included professors and scientists from universities all over the world.

“For high-school students, the background and motivation of this research are far beyond anything that one would normally learn in school, so they worked hard to learn about particle physics and astrophysics, to scan the Swift X-Ray Telescope database for information about X-ray flaring blazars, and to prepare the presentation, including throughout their Spring break,” said BWHS Physics and Astronomy teacher Dr. Parisa Roustazadeh. “Their presentation was very well received.”

“Neutrinos are electrically neutral, almost massless elementary particles which almost never interact with anything,” explained Dr. Roustazadeh. “The IceCube detector on the South Pole has, since 2010, detected a flux of very-high-energy neutrinos from cosmic sources, but their origin remains a mystery.

“A special class of active galactic nuclei called blazars have long been considered a prime candidate to be the sources of these high-energy neutrinos.
In many active galactic nuclei, a supermassive black hole at the center of a galaxy voraciously accretes matter from its environment and, in the process, ejects collimated jets of material moving out with almost the speed of light. In blazars, one of these jets points almost directly towards Earth, greatly enhancing the brightness of radiation we see from them. While previous searches to confirm the association between high-energy neutrinos and blazars have focused on the highest-energy form of radiation, gamma-rays, to be particularly bright when neutrinos are produced, there are strong theoretical arguments that such a correlation is more likely to be ubiquitous between neutrinos and X-ray bright sources.

“Matthew, Timothy, and Quentin have, therefore, systematically searched for X-ray bright counterparts of neutrino alerts from the past 10 years. Whenever such information was available, Matthew, Timothy, and Quentin actually did find possible counterpart blazars to be in X-ray bright states. This may be an important step towards confirming that blazars are the sources of at least some of the neutrinos detected by the IceCube detector.”

Markus Boettcher, Professor and NRF SARChI Chair of Astrophysics and Space Physics at North-West University in South Africa said, ” Matthew, Timothy, and Quentin are so bright students. They did an excellent job.”