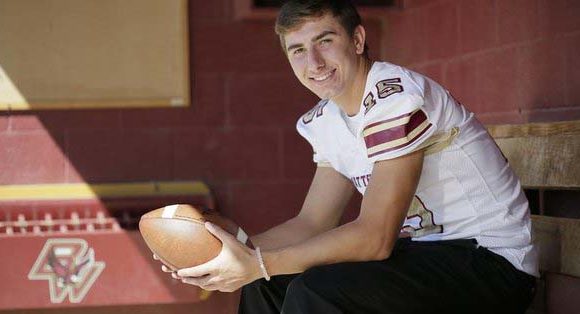 College: Will sign national letter of intent with the University of Cincinnati to play baseball. Undecided on a course of study

Question: What does it feel like to be a senior?

Answer: I heard so many people say that it flashes by so fast and to take advantage of every opportunity that comes your way, and they were right. It’s so crazy because four years have flown by. I do think I have taken advantage of high school. I’ve enjoyed every minute of it.

Q: How did the Cincinnati scholarship offer come about?

A: Things started to happen quickly during the winter with the recruiting process. It started off by sending emails and getting replies. Then I started to get my name out there by going to camps. I went to two at UC, one as a sophomore and one this past winter. I didn’t do so well in the first one, but the second camp is when things fired up. I thought I did well. I also talked to Marshall and Xavier.

Q: What goes on during a camp?

A: There are different types of camps. Some are run by colleges and others by (outside organizers) such as Prep Baseball Report. Some are showcases where there are no games. There are defensive evaluations where you take fly balls and ground balls at your position. At others, there is batting practice, followed by a 12-inning game in which you get at least three at bats. Coaches like to see arm strength because you can’t coach that. It’s all about how hard you throw it.

Q: Do you remember when Cincinnati offered?

A: It was January after the camp and (former) coach (Ty) Neal said we’d go to his office and talk about the future. I was just shaking — it was so crazy. There was so much excitement. I’ve been working toward this my entire life, to play a sport that I love and to go to school at a Division I university that I love. My whole family went to UC, my grandfather, father and an aunt and uncle. The campus looks great. They’ve done so much remodeling.

Q: Is it difficult to keep your concentration at Watterson?

A: I take things personally and I’m working hard to get what I want academically. No way will I slack off. I’m taking AP government, calculus, English, advanced marketing, forensic science and business management.

Q: How old were you when you came to Columbus from Gainesville, Florida?

A: I was in sixth grade and the transition was fine. I actually wanted to go through four seasons because the summers were miserable, especially playing baseball, in Florida. It was harder on my mother (Shelley) because she loves the heat — 97 degrees and humidity. The most difficult part was leaving friends. Then everyone was looking at the new kid, but I did make friends quickly.

Q: Has being around Ohio State football with your father, Urban, as coach helped you with athletics?

A: Growing up in that atmosphere watching my dad teach this amazing work ethic — to get people to keep straining and get what they want out of themselves — is what I’ve tried to do with my life. I’ve learned leadership skills because it all happened right in front of me.

Q: What will you try to do as captain of the baseball team?

A: I want to let teammates know that I always will be there for them. You have to make sure there is 100 percent effort from everyone.

Q: What type of Buckeyes fan are you?

A: When I’m not at the game, I keep things internal. I don’t scream. When you are on the field, it’s a totally different experience. I do let out emotion. I have personal relationships with a lot of the players.

Athletic Updates for the Week of 9/25/17 to 10/1/17: Claire GhidottiMrs. Matthews Honored by Italian Consulate